Sinhalese history is authenticated by the concurrence of every evidence that can contribute to verify the annals of any country – “Ceylon” Pearl of the East by Harry Williams...

Chapter 26 - The Consecrating Of The Maricavatti-vihara

WHEN that king of high renown had united Lanka in one kingdom he distributed places of honour to his warriors according to their rank. The warrior Theraputtabhaya would not have that which was allotted to him, and being asked: `Wherefore?’ he answered: `It is war.’ And questioned (yet again): `When a single realm is created what war is there?’ he answered: `I will do battle with those rebels, the passions, (battle) wherein victory is hard to win.’ Thus said he, and again and again the king sought to restrain him. When he had entreated again and again he took the pabbajja with the king’s consent. After taking the pabbajja he attained in time to arahantship, and he lived in the midst of five hundred (bhikkhus) who had overcome the asavas.

When the week of the festival of kingship was gone by the fearless king Abhaya,[1] who had carried out the consecration with great pomp, went to the Tissa-tank, that was adorned according to the festival custom, to hold festival plays there and to observe the tradition of crowned kings. 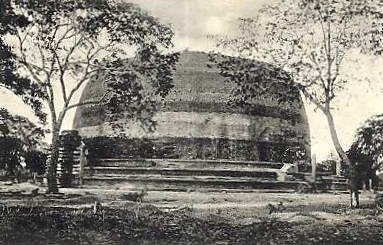 All that had been made ready for the king and hundreds of offerings did they place on the spot where the Maricavatti-vihara[2] (afterwards stood). There in the very place where the thupa (afterwards) stood the king’s people who carried the spear planted the splendid spear with the relic.[3] When the king had disported himself in the water the whole day through, together with the women of the harem, he said, in the evening: `We will go hence; carry the spear before us.’

And the people entrusted with (this duty) could not move the spear from its place; and the king’s soldiers came together and brought offerings of perfumes and flowers. When the king saw this great miracle, glad at heart he appointed sentinels there, and after he had returned forthwith into the city he built a cetiya in such wise that it enclosed the spear and founded a vihara that enclosed the thupa.

In three years the vihara was finished and the ruler of men called the brotherhood together to hold the festival (on the consecration) of the monastery. A hundred thousand bhikkhus and ninety thousand bhikkhunis were gathered together there. Then in this assembly the king spoke thus to the brotherhood: ‘Without a thought of the brotherhood, venerable sirs, I ate pepper in the pod. Thinking: This shall be my act of expiation, I have built the pleasant Maricavatti vihara, together with the cetiya. May the brotherhood accept it!’ With these words he poured forth the (ceremonial) water of a gift and piously gave the monastery to the brotherhood. When he had set up a great and beautiful hall in the vihara and round about it, he commanded that lavish gifts should be given there to the brotherhood. The hall was so planned that stakes were set even in the water of the Abhaya-tank,[4] what need of further words to speak of the remaining space (covered) ?

When the ruler of men had given food, drink and so forth, for a week, he offered as a gift the whole of the costly necessaries for samanas.[5] These necessaries began with a cost of a hundred thousand (kahapanas) and ended with a cost of a thousand. All this did the brotherhood receive. The money that was spent there in gratitude by the wise king, who was a hero in battle as in largess, whose pure heart was filled with faith in the Three Gems, who desired to raise the (Buddha’s) doctrine to glory, (that was spent) to honour the Three Gems, beginning with the building of the thupa and ending with the festival of the vihara, (all this money), leaving aside the rest of the priceless (gifts), is reckoned as but one less than twenty kotis.[6]

Treasures which, in truth, bear on them the blot of the five faults[7] become, if they be acquired by people who are gifted with special wisdom, possessed of the five advantages;[8] therefore let the wise man strive to have them thus.

Here ends the twenty-sixth chapter, called `The Consecrating of the Maricavatti-vihara’, in the Mahavamsa, compiled for the serene joy and emotion of the pious.

The most costly parikkhara (see note to 4. 26) was allotted to the most distinguished monks (TL samghattheranam) ; the value was then graduated according to the rank of the recipient. The literal translation runs thus: the parikkhara had at first (at the beginning) the value of . . ., at the end the value of . . . . ,

According to the Tika the five dangers which threaten the wealth are meant : loss by fire, water, living creatures, confiscation or brigandage.

The construction is: bhoga . . . honti . . . gahitasara. The five benefits are, according to the Tika : popularity among men, high esteem among pious men, fame, fidelity in fulfilment of layduties, and attainment of heaven after death. These advantages are possessed by a kingdom when well governed.