Sinhalese history is authenticated by the concurrence of every evidence that can contribute to verify the annals of any country – “Ceylon” Pearl of the East by Harry Williams...

Chapter 20 - The Nibbana Of The Thera

IN the eighteenth year (of the reign) of king Dhammasoka, the great Bodhi-tree was planted in the Mahameghavanarama. In the twelfth year afterwards died the dear consort of the king, Asamdhimitta, the faithful (believer) in the Sambuddha. In the fourth year after this the ruler of the earth Dhammasoka raised the treacherous Tissarakkha to the rank of queen. In the third year thereafter this fool, in the pride of her beauty, with the thought: ‘Forsooth, the king worships the great Bodhi-tree to my cost!’ drawn into the power of hate and working her own harm, caused the great Bodhi-tree to perish by means of a mandu-thorn.[1] In the fourth year after did Dhammasoka of high renown fall into the power of mortality. These make up thirty-seven years.

But when king Devanampiyatissa, whose delight was in the blessing of the true doctrine, had brought to completion in seemly wise his undertakings in the Mahavihara, on the Cetiya-mountain and also in the Thuparama, he asked this question of the thera who had converted the island, who was skilled in (answering) questions: ‘Sir, I would fain found many viharas here; whence shall I get me the relics to place in the thupas ?’

‘There are the relics brought hither by Sumana, with which he filled the bowl of the Sambuddha and which were placed here on the Cetiya-mountain, O king. Have these relics placed on the back of an elephant and brought hither.’ Thus addressed by the thera he brought thus the relics hither. Founding viharas a yojana distant from one another he caused the relics to be placed there in the thupas, in due order. But the bowl that the Sambuddha had used the king kept in his beautiful palace and worshipped continually with manifold offerings. 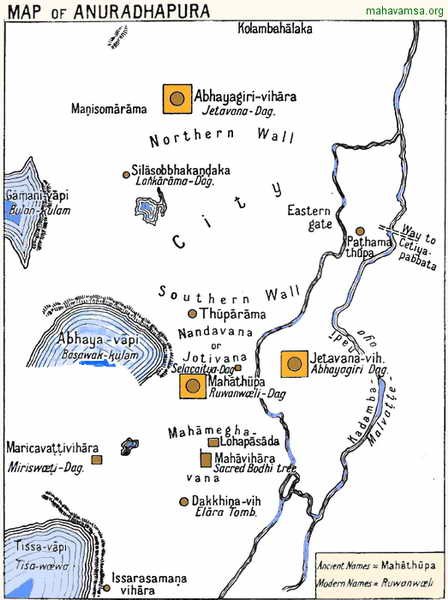 First the Mahavihara,[6]
then the (monastery) named Cetiya vihara,
third the beautiful Thuparama,[7] which the thupa (itself) preceded,
fourth the planting of the great Bodhi-tree,
then fifth the (setting up) in seemly wise (of the) beautiful stone pillar which was intended to point to the place of the thupa, on the place where the Great cetiya (afterwards) was, and also the enshrining of the Sambuddha’s collar-bone relic,[8]
sixth the Issarasamana (vihara),
seventh the Tissa-tank,
eighth the Pathamathupa,[9]
ninth the (vihara) called Vessa(giri),
then that pleasant (nunnery) which was known as the Upasika(vihara) and the (vihara) called the Hatthalhaka, those two convents as goodly dwellings for the bhikkhunis; and (furthermore) for the accepting of food by the brotherhood of bhikkhus when they were visiting the dwelling of the bhikkhunis (called) Hatthalhaka(vihara),[10] the refectory called Mahapali, easy of approach, beautiful, stored with all provisions and provided with service; then lavish gifts, consisting of the needful utensils for a thousand bhikkhus, (which things he gave) on the pavarana-day, every year; in Nagadipa the Jambukolavihara at this landing place,[11] the Tissamahavihara[12] and the Pacinarama[13]: these woks, caring for the salvation of the people of Lanka, Devanampiyatissa, king of Lanka, rich in merit and insight, caused to be carried out, even in his first year, as a friend to virtue, and his whole life through he heaped up works of merit. Our island flourished under the lordship of this king; forty years did he hold sway as king.

After his death, his younger brother since there was no son, the prince known by the name Uttiya, held sway piously as king. But the great thera, Mahinda, who had taught the peerless doctrine of the Master, the sacred writings, the precepts of righteousness and the higher perfection,[14] full excellently in the island of Lanka, (Mahinda) the light of Lanka, the teacher of many disciples, he who, like unto the Master, had wrought great blessing for the people, did, in the eighth year of king Uttiya, while he, being sixty years old,[15] was spending the rain season on the Cetiya-mountain, pass, victorious over his senses, into nibbana, on the eighth day of the bright half of the month Assayuja. Therefore this day received his name.

When king Uttiya heard this he went thither, stricken by the dart of sorrow, and when he had paid homage to the thera and oft and greatly had lamented (over him) he caused the dead body of the thera to be laid forthwith in a golden chest sprinkled with fragrant oil, and the well closed[16] chest to be laid upon a golden, adorned bier; and when he had caused it then to be lifted upon the bier, commanding solemn ceremonies, he caused it to be escorted by a great multitude of people,[17] that had come together from this place and that, and by a great levy of troops; commanding due offerings (he caused it to be escorted) on the adorned street to the variously adorned capital and brought through the city in procession by the royal highway to the Mahavihara.

When the monarch had caused the bier to be placed here for a week in the Panhambamalaka with triumphal arches, pennons, and flowers, and with vases filled with perfumes the vihara was adorned and a circle of three yojanas around, by the king’s decree, but the whole island was adorned in like manner by the decree of the devas and when the monarch had commanded divers offerings throughout the week he built up, turned toward the east in the Theranambandhamalaka, a funeral pyre of sweet smelling wood, leaving the (place of the later) Great thupa on the right, and when he had brought the beautiful bier thither and caused it to be set upon the pyre he carried out the rites of the dead.[18]

And here did he build a cetiya when he had caused the relics to be gathered together. Taking the half of the relics the monarch caused thupas to be built on the Cetiya-mountain and in all the viharas. The place where the burial of this sage’s body had taken place is called, to do him honour, Isibhumangana.[19]

From that time onwards they used to bring the dead bodies of holy men from three yojanas around to this spot and there to burn them.

When the great theri Samghamitta, gifted with the great supernormal powers and with great wisdom had fulfilled the duties of the doctrine and had brought much blessing to the people, she, being fifty-nine years old, in the ninth year of this same king Uttiya, while she dwelt in the peaceful Hatthalhaka-convent, passed into nibbana. And for her also, as for the thera, the king commanded supreme honours of burial a week through, and the whole of Lanka was adorned as for the thera.

The body of the theri laid upon a bier did he cause to be brought when the week was gone by, out of the city; and to the east of the Thuparama, near the Cittisala[20] (of later times) in sight of the great Bodhi-tree, on the spot pointed out by the theri (herself), he caused the burning to take place. And the most wise Uttiya also had a thupa built there.

The five great theras also,[21] and those theras too of whom Arittha was the leader, and many thousand bhikkhus who were freed from the asavas, and also the twelve theris among whom Samghamitta stood highest, and many thousand bhikkhunis who were freed from the asavas, who, endowed with great learning and deep insight had expounded the holy scripture of the Conqueror, the vinaya and the rest, fell, in time, into the power of mortality.

Ten years did king Uttiya reign; thus is mortality the destroyer of the whole world.

A man who, although he knows this overmastering, overwhelming, irresistible mortality, yet is not discontented with the world of existence and does not feel, in this discontent, resentment at wrong nor joy in virtue that is the strength of the fetters of his evil delusion ! such an one is knowingly fooled.[22]

Here ends the twentieth chapter, called ‘The Nibbana of the Thera’, in the Mahavamsa, compiled for the serene joy and emotion of the pious.

In the Dadhivahana-jataka (FAUSBOLL, Jataka, ii, p. 105(1)) is related how the kernel of a mango-fruit is deprived of its germinating power by being pierced with a mandu-thorn.

I. e. in Cetiyapabbata-vihara on Mihintale. I would now prefer to take the words sapabbate vihare (‘in the monastery, which, or the name of which was connected with the mountain ‘) as belonging to the relative clause y a ya &c., and to place the comma here instead of after guha.

The instrumental bhikkhusamghena belongs to the verbal noun gahanam. Subordinate to this noun are the parallel gerunds osaritva and gantvana, the last being almost a pleonasm. On this subject the Tika remarks that at that time the monks in order to receive food went in order of seniority to the Hatthalhaka-convent. The new hall was built by Devanampiyatissa for this purpose, i. e. as refectory for the bhikkhus, separate from the nunnery.

Pariyattim patipattim pativedham ca. According to the Tika pariyatti is a synonym of tipitaka, while patipatti represents the contents of the doctrines of the sacred scripture, namely, the way leading to deliverance as pointed out by the precepts of morality (Tika: pariyattisasanassa atthabhuto siladikhandhattayasahito  nibbanagamimaggo). By pativedha (literally ‘attainment’) are meant the nine transcendental conditions (the lokuttaradhamma) which result from the observance of the patipatti (Tika: patipattisasanassa phalabhuto navavidhalokuttaradhammo). Those nine conditions of perfection are the four magga ‘paths’ or stages of holiness, with the corresponding four phalani ‘results, effects’, besides nibbana as the ninth. It is,therefore, said that Mahinda had proclaimed the Buddha’s doctrine and the holiness resulting therefrom.

Wijesinha gives a wrong sense to the clause in taking it as a question. The verbs nibbindate and kurute belong to the relative sentence. The governing clause is janam pi (so) sammuyhati. The words tassesa atimohajalabalata are only intelligible as a parenthesis.