This page contains an iconography image of Ten principal Hindu deities: Ganapati and represents figure 241 of the book Indian Buddhist Iconography, based on extracts of the Sadhanamala English translation. These plates and illustrations represent either photographs of sculptures or line-drawing reproductions of paintings or other representations of Buddhist artwork. 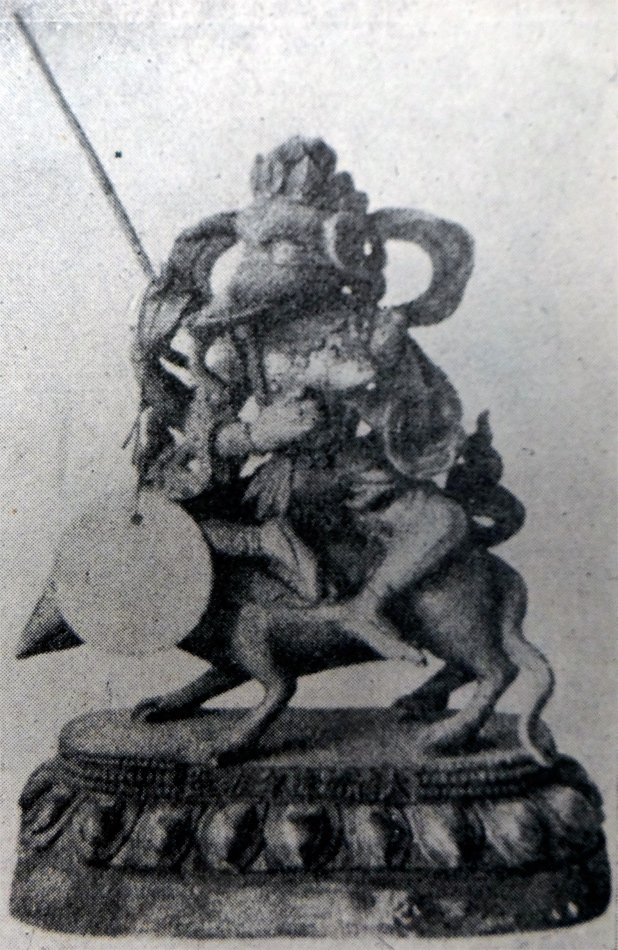 In the Brahmā group there are ten deities [viz., Gaṇapati]. They are popular in India and their statuettes occur in the Chinese collection. Their appearance in the Buddhist pantheon is almost the same as we find them described in the Purāṇas and Tantric works of the Hindus. The gods of the Brahma group are described with typical examples in the same order as they appear in the Dharmadhātuvāgīśvara-maṇḍala of the Niṣpannayogāvalī.

Gaṇapati is a popular deity in the Buddhist pantheon. He is described several times in the Niṣpannayogāvalī, and as already stated an independent Sādhana in the Sādhanamālā is devoted to his worship. In the Maṇḍala of Dharmadhātuvāgīśvara his description is as follows: “Gaṇapati rides on a Mouse and is white in colour. He has an elephant face and a snake forms his sacred thread. He is four-armed. In the two right hands he carries the Triśūla and the Laḍḍuka (sweet balls), and in the two left the Paraśu (axe) and the Mūlaka (radish)”.

In the Bhūtaḍāmara-maṇḍala, he is given four hands carrying the Mūlaka and the Paraśu in the two right, and the Triśūla and the Kapāla in the two left.

One statuette of his is recorded in the Chinese collection. It is illustrated in Fig. 241.