This page contains an iconography image of Twelve Paramitas: Dhyanaparamita and represents figure 219 of the book Indian Buddhist Iconography, based on extracts of the Sadhanamala English translation. These plates and illustrations represent either photographs of sculptures or line-drawing reproductions of paintings or other representations of Buddhist artwork. 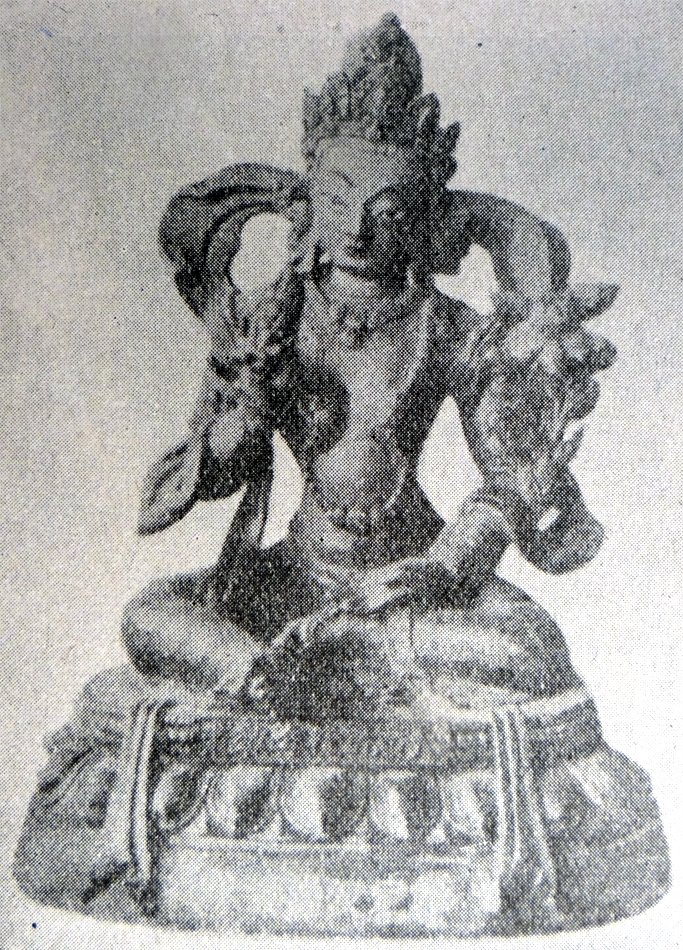 In Buddhism, importance is given to the Pāramitās or perfections. These are certain cardinal human virtues carried to perfection in one birth. It is said that Lord Buddha in each of his previous births practised one or another of the virtues and carried it to perfection, and because of that he obtained enlightenment in his last birth. These Pāramitās are usually ten in number, but the Vajrayānists raised the number to twelve. In Vajrayāna the craze for deificatian led to the conception of the Twelve Pāramitā goddesses in human form, for the purpose of worship. One of the Pāramitā deities, Prajñāpāramitā is the most important and popular in Buddhist countries. Prajñāpāramitā or transacendental intuition was taught in the Prajñāpāramitā scripture which is supposed to have been rescued from the Nether regions by Nāgārjuna.

In the Dharmadhātuvāgīśvara-maṇḍala of the Niṣpannayogāvalī an account of the iconography of the Twelve Pāramitā deities [viz., Dhyānapāramitā, Dhyāna-pāramitā] is given, and it is stated briefly here in the same order as found in the Maṇḍala. Such a description of all the Pāramitā goddesses cannot be met with in any other published literature on Buddhism. The twelve deities collectively have their spiritual father in Ratnasambhava. They are widely represented in the Chinese collection at Peiping which seems to have been profoundly influenced by India in general, and the Niṣpannayogāvalī in particular. These Pāramitā deities are described in detail in the following sections.

The sixth Pāramitā goddess in the series is Dhyānapāramitā whose form is described as under: “Dhyānapāramitā is of sky colour and holds in her left hand the white lotus”. The right hand as usual carries the Cintāmaṇi banner. A statuette of this goddess is found in China. Fig. 219 illustrates this Chinese specimen.