This page contains an iconography image of Emanations of Amoghasiddhi: Vashyatara (Vashya Tara) and represents figure 170 of the book Indian Buddhist Iconography, based on extracts of the Sadhanamala English translation. These plates and illustrations represent either photographs of sculptures or line-drawing reproductions of paintings or other representations of Buddhist artwork. 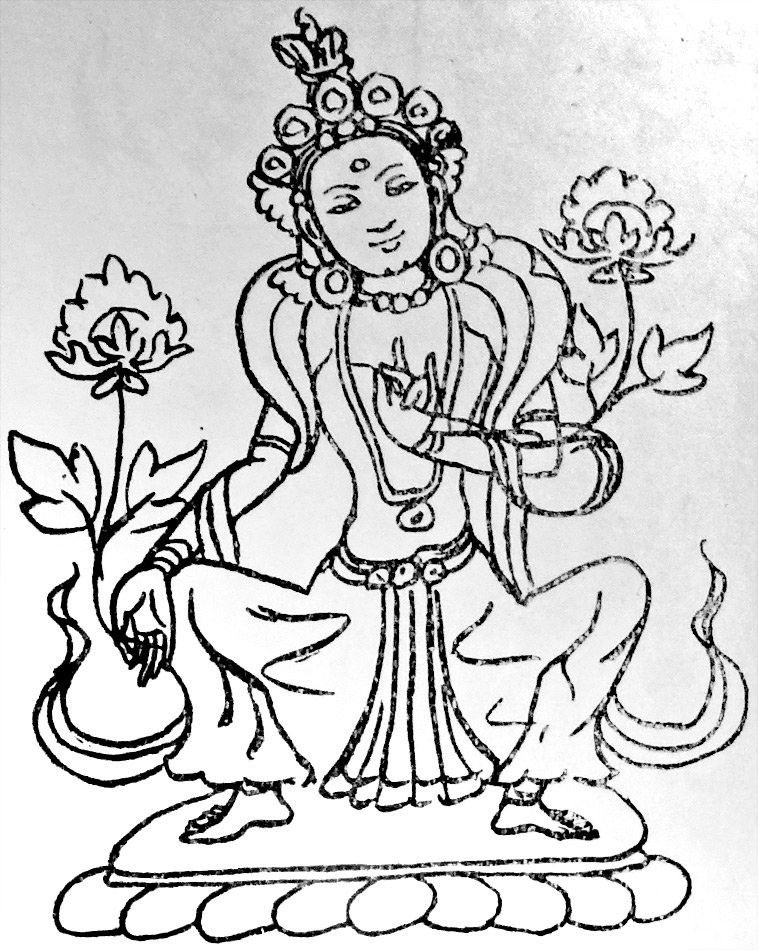 Vaśyatārā, is also known by the name of Āryatārā, and only one Sādhana in the Sādhanamālā is assigned to her. There is practically no difference between her form and that of Khadiravaṇī-Tārā in as much as both display the Varada-mudrā in the right hand and carry the Utpala in the left. Both have green colour, and both bear the image of Amoghasiddhi on their crowns. In the case of Khadiravaṇī-Tārā, however, no mention is made regarding the attitude in which she should stand or sit, but here it is expressly mentioned that Vaśyatārā should be seated in the Bhadrāsana, which resembles the European fashion of sitting with both legs dangling below.

This Āsana, or the attitude of sitting alone distinguishes Vaśyatārā from other ordinary Tārās carrying the Utpala in the left and exhibiting the Varada-mudrā in the right. The other point of difference between Khadiravaṇī-Tārā and Vaśyatārā is, that the former is accompanied by the two goddesses, Aśokakāntā Mārīcī and Ekajaṭā, whereas the latter is without companions. Khadiravaṇī may sit or stand in any attitude, but the Sādhana prescribes the Bhadrāsana only for Vaśyatārā.

The accompanying sketch (Fig. 170) represents Vaśyatārā as she is pictured in Nepal, and its special importance lies in its depiction of the Bhadrāsana attitude in which the goddess sits.