This page contains an iconography image of Emanations of Vairocana: Namasangiti (or Namasamgiti) and represents figure 151 of the book Indian Buddhist Iconography, based on extracts of the Sadhanamala English translation. These plates and illustrations represent either photographs of sculptures or line-drawing reproductions of paintings or other representations of Buddhist artwork. 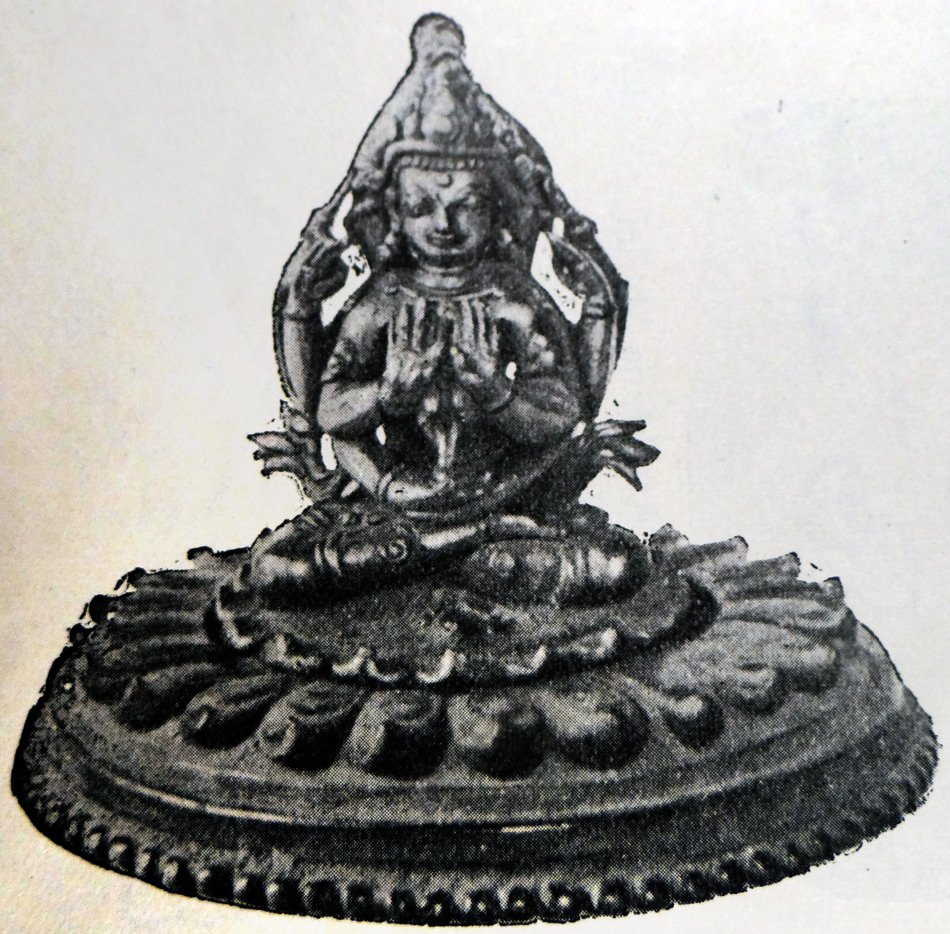 Pandit Amṛtānanda’s Dharmakoṣasaṅgraha (Dharmakośasaṃgraha) gives the description of a most interesting god, named as Nāmasaṅgīti (Nāmasaṃgīti). This description enables the students of iconography to identify a large number of his images that he scattered throughout the Nepal valley and other Buddhist countries. This deity should be distinguished from the Nāmasaṅgīti Mañjuśrī who has already been described as one of the varieties of the Bodhisattva Manjuśrī. Like the goddess Prajñāpāramitā who is the embodiment of the Prajñāpāramitā literature, Nāmasaṅgīti also seems to be the deification of the Nāmasaṅgīti literature of the Buddhists. Pandit Amṛtānanda characterises Nāmasaṅgīti as a Buddha but from the description and the illustration it would appear that he is a Bodhisattva, The elaborate ornaments, the fierce symbol of Khaṭvaṅga as also other Bodhisattva symbols do not befit a Buddha. Although the parental Dhyāni Buddha of Nāmasaṅgīti is not expressly mentioned in the description of Amṛtānanda, he is brought here under Vairocana because of his white colour.

Images of Nāmasaṅgīti are to be found in large numbers in Nepal either in stone or in bronze and he is popular also in Tibet and China. Getty erroneously labels this deity as a “Dogmatic Form of Avalokiteśvara” and the names given to the various mudrās exhibited by the deity are also inaccurate.

The image reproduced by Getty has lost the sword on the double Vajra and the Khaṭvaṅga with the Vajra carried in the third pair of hands by the deity.

Fig. 151 illustrates a Nepalese statuette of the deity.