The Buddha and His Teachings

This book is an attempt to present the life and teachings of the Buddha , made by a member of the Order of the Sangha. The first part of the book deals with the Life of the Buddha, the second with the Dhamma, the Pāli term for His Doctrine. Used as reference are: Pāli Texts, commentaries, and traditions prevailing in Buddhist countries, especiall...

"Not to be reached by going is world's end."

According to Buddhism the earth, an almost insignificant speck in the universe, is not the only habitable world, and humans are not the only living beings. Indefinite are world systems and so are living beings. Nor is "the impregnated ovum the only route to rebirth." By traversing one cannot reach the end of the world, [1] says the Buddha.

Births may take place in different spheres of existence. There are altogether thirty-one places in which beings manifest themselves according to their moral or immoral kamma.

There are four states of unhappiness (apāya) [2] which are viewed both as mental states and as places:

1. Niraya (ni + aya = "devoid of happiness"), woeful states where beings atone for their evil kamma. They are not eternal hells where beings are subject to endless suffering. Upon the exhaustion of the evil kamma there is a possibility for beings born in such states to be reborn in blissful states as the result of their past good actions.

2. Tiracchāna-yoni (tiro = across; acchāna = going), the animal kingdom. Buddhist belief is that beings are born as animals on account of evil kamma. There is, however, the possibility for animals to be born as human beings as a result of the good kamma accumulated in the past. Strictly speaking, it should be more correct to state that kamma which manifested itself in the form of a human being, may manifest itself in the form of an animal or vice versa, just as an electric current can be manifested in the forms of light, heat, and motion successively—one not necessarily being evolved from the other.

It may be remarked that at times certain animals, particularly dogs and cats, live a more comfortable life than even some human beings due to their past good kamma.

It is one's kamma that determines the nature of one's material form which varies according to the skilfulness or unskilfulness of one's actions.

3. Peta-yoni lit., departed beings, or those absolutely devoid of happiness. They are not disembodied spirits of ghosts. They possess deformed physical forms of varying magnitude, generally invisible to the naked eye. They have no planes of their own, but live in forests, dirty surroundings, etc. The Peta Vatthu (Book VIII of the Kuddaka Nikāya) deals exclusively with the stories of these unfortunate beings. The Saṃyutta Nikāya also relates some interesting accounts of these petas.

Describing the pathetic state of a peta, the Venerable Moggallāna says:

Just now as I was descending Vultures' Peak Hill, I saw a skeleton going through the air, and vultures, crows, and falcons kept flying after it, pecking at its ribs, pulling it apart while it uttered cries of pain. To me, friend, came this thought: O but this is wonderful! O but this is marvellous that a person will come to have such a shape, that the individuality acquired will come to have such a shape.

"This being," the Buddha remarked, "was a cattle-butcher in his previous birth, and as the result of his past kamma he was born in such a state." [3]

According to the Questions of Milinda there are four kinds of petas—namely, the vantāsikas who feed on vomit, the khuppipāsino who hunger and thirst, the nijjhāmataṇhika, who are consumed by thirst, and the paradattūpajīvino who live on the gifts of others.

As stated in the Tirokuḍḍa Sutta [4] these last mentioned petas share the merit performed by their living relatives in their names, and could thereby pass on to better states of happiness.

4. Asura-yoni—the place of the asura demons. Asura, literally, means those who do not shine or those who do not sport. They are also another class of unhappy beings similar to the petas. They should be distinguished from the asuras who are opposed to the devas.

The human realm is a mixture of both pain and happiness. Bodhisattas prefer the human realm as it is the best field to serve the world and perfect the requisites of buddhahood. Buddhas are always born as human beings.

2. Cātummahārājika—the lowest of the heavenly realms where the guardian deities of the four quarters of the firmament reside with their followers.

3. Tāvatiṃsa—lit., "thirty-three"—the celestial realm of the thirty-three devas [6] where deva Sakka is the king. The origin of the name is attributed to a story which states that thirty-three selfless volunteers led by Magha (another name for Sakka), having performed charitable deeds, were born in this heavenly realm. It was in this heaven that the Buddha taught the Abhidhamma to the devas for three months.

The bodhisattas who have perfected the requisites of buddhahood reside in this plane until the opportune moment comes for them to appear in the human realm to attain buddhahood. The bodhisatta Metteyya, the future Buddha, is at present residing in this realm awaiting the right opportunity to be born as a human being and become a Buddha. The Bodhisatta's mother, after death, was born in this realm as a deva. From here she repaired to Tāvatimsa Heaven to listen to the Abhidhamma taught by the Buddha.

6. Nimmānaratī— "the realm of the devas who delight in the created mansions."

7. Paranimmitavasavattī—"the realm of the devas who make others' creation serve their own ends."

The last six are the realms of the devas whose physical forms are more subtle and refined than those of human beings and are imperceptible to the naked eye. These celestial beings too are subject to death as all mortals are. In some respects, such as their constitution, habitat, and food they excel humans, but do not as a rule transcend them in wisdom. They have spontaneous births, appearing like youths and maidens of fifteen or sixteen years of age.

These six celestial planes are temporary blissful abodes where beings are supposed to live enjoying fleeting pleasures of sense.

Superior to these sensuous planes are the Brahmā realms or rūpaloka (realms of form) where beings delight in jhānic bliss, achieved by renouncing sense-desires.

Rūpaloka consists of sixteen realms according to the jhānas or ecstasies cultivated. They are listed below, and are depicted in Diagram 6.

In the eleventh plane, called the asaññasatta, beings are born without a consciousness. Here only a material flux exists. Mind is temporarily suspended while the force of the jhāna lasts. Normally both mind and matter are inseparable. By the power of meditation it is possible, at times, to separate matter from mind as in this particular case. When an arahant attains the nirodha samāpatti, too, his consciousness ceases to exist temporarily. Such a state is almost inconceivable to us. But there may be inconceivable things which are actual facts.

The Suddhāvāsas or Pure Abodes are the exclusive planes of anāgāmis or never-returners. Ordinary beings are not born in these states. Those who attain anāgāmi in other planes are reborn in these pure abodes. Later, they attain arahantship and live in those planes until their life-term ends.

There are four other planes called arūpaloka which are totally devoid of matter or bodies. Buddhists maintain that there are realms where mind alone exists without matter. "Just as it is possible for an iron bar to be suspended in the air because it has been flung there, and it remains as long as it retains any unexpended momentum, even so the formless being appears through being flung into that state by powerful mind-force, there it remains till that momentum is expended. This is a temporary separation of mind and matter, which normally co-exist." [7]

It should be mentioned that there is no sex distinction in the rūpaloka and the arūpaloka.

The arūpaloka is divided into four planes according to the four arūpa jhānas:

It should be remarked that the Buddha did not attempt to expound any cosmological theory.

The essence of the Buddha's teaching is not affected by the existence or non-existence of these planes. No one is bound to believe anything if it does not appeal to his reason. Nor is it proper to reject anything because it cannot be conceived by one's limited knowledge. 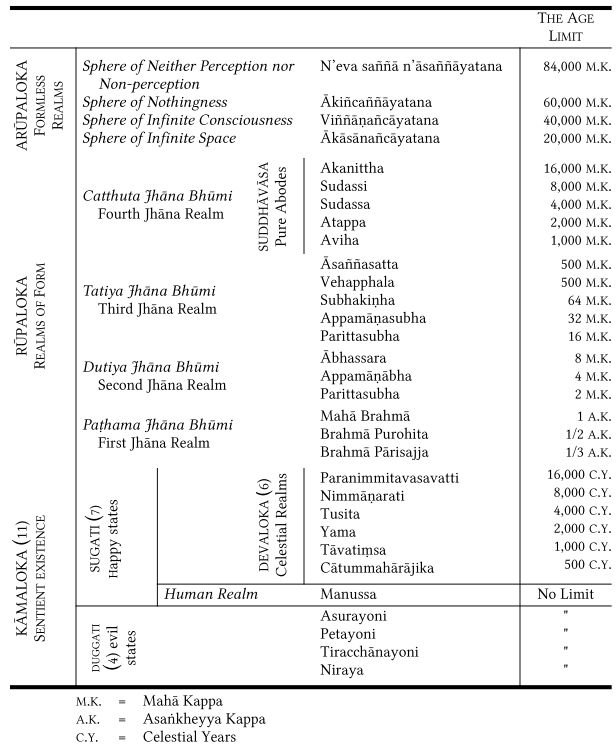 Diagram 6. The Planes of Existence

Literally, those who have an uplifted or developed mind (mano ussannaṃ etāsaṃ). The Sanskrit equivalent of manussa is manushya which means the sons of Manu. They are so called because they became civilised after Manu the seer.

A Chinese Buddhist book (Guide to Buddhahood) states that on each of the four sides of this plane are eight heavens (totalling thirty-two) and a central one where King Sakka dwells.

For details and the life-term of various planes see Diagram 6 The Planes of Existence..