The Buddha and His Teachings

This book is an attempt to present the life and teachings of the Buddha , made by a member of the Order of the Sangha. The first part of the book deals with the Life of the Buddha, the second with the Dhamma, the Pāli term for His Doctrine. Used as reference are: Pāli Texts, commentaries, and traditions prevailing in Buddhist countries, especiall...

"No God, no Brahmā can be found,
No matter of this wheel of life,
Just bare phenomena roll
Dependent on conditions all!"

The process of rebirth has been fully explained by the Buddha in the paṭicca samuppāda.

Paṭicca means "because of" or "dependent upon"; samuppāda means"arising" or "origination." Although the literal meaning of the term is "arising because of" or " dependent arising or origination," it is applied to the whole causal formula which consists of twelve interdependent causes and effects, technically called paccayaandpaccayuppanna.

Paṭicca samuppāda is a discourse on the process of birth and death, and not a philosophical theory of the evolution of the world. It deals with the cause of rebirth and suffering with a view to helping men to get rid of the ills of life. It makes no attempt to solve the riddle of an absolute origin of life.

It merely explains the "simple happening of a state, dependent on its antecedent state." [1]

Ignorance (avijjā) of the truth of suffering, its cause, its end, and the way to its end, is the chief cause that sets the wheel of life in motion. In other words, it is the not-knowingness of things as they truly are or of oneself as one really is. It clouds all right understanding.

"Ignorance is the deep delusion wherein we here so long are circling round," [2] says the Buddha.

When ignorance is destroyed and turned into knowingness, all causality is shattered as in the case of the Buddhas and arahants.

In Itivuttaka 1:14 the Buddha states, "Those who have destroyed delusion and broken through the dense darkness, will wander no more: causality exists no more for them."

Ignorance of the past, future, both past and future and dependent origination is also regarded as avijjā.

Saṇkhārā, as one of the five aggregates, implies fifty of the fifty-two mental states, excluding feeling and perception.

There is no proper English equivalent which gives the exact connotation of this Pali term.

All moral and immoral thoughts, words and deeds are included in saṇkhārā. Actions, whether good or bad, which are directly rooted in, or indirectly tainted with ignorance, and which must necessarily produce their due effects, tend to prolong wandering in saṃsāra. Nevertheless, good deeds, freed from greed, hate and delusion, are necessary to get rid of the ills of life. Accordingly the Buddha compares his Dhamma to a raft whereby one crosses the ocean of life. The activities of Buddhas and arahants, however, are not treated as saṇkhārā as they have eradicated ignorance.

Dependent on past conditioning activities arises relinking or rebirth-consciousness (paṭisandhi-viññāṇa) in a subsequent birth. It is so called because it links the past with the present, and is the initial consciousness one experiences at the moment of conception.

Viññāṇa strictly denotes the nineteen types of rebirth-consciousness (paṭisandhi-viññāṇa) described in the Abhidhamma. All the thirty-two types of resultant consciousness (vipāka-citta) experienced during lifetime are also implied by the term.

The foetus in the mother's womb is formed by the combination of this relinking-consciousness with the sperm and ovum cells of the parents. In this consciousness are latent all the past impressions, characteristics and tendencies of that particular individual life-flux.

This rebirth-consciousness is regarded as pure [3] as it is either devoid of immoral roots of lust, hatred, and delusion [4] or accompanied by moral roots. [5]

Simultaneous with the arising of the relinking-consciousness there occur mind and matter (nāma-rūpa) or, as some scholars prefer to say, "corporeal organism."

The second and third factors (saṇkhārā and viññāṇa) pertain to the past and present lives of an individual. The third and fourth factors (viññāṇa and nāma-rūpa) on the contrary, are contemporaneous.

Sex-decad and base decad also consist of the first nine and sex (bhāva) and seat of consciousness (vatthu) respectively.

From this it is evident that sex is determined by past kamma at the very conception of the being.

Here kāya means the sensitive part of the body (pasāda).

In this connection it should be remarked that the Buddha did not definitely assign a specific seat for consciousness as he has done with the other senses. It was the cardiac theory (the view that the heart is the seat of consciousness) that prevailed in his time, and this was evidently supported by the Upanishads.

The Buddha could have accepted the popular theory, but he did not commit himself. In the Pahāna (the Book of Relations) the Buddha refers to the seat of consciousness, in such indirect terms as "yamrūpamnissāya—depending on that material thing," without positively asserting whether that rūpa was either the heart (hadaya) or the brain. But, according to the view of commentators like Venerable Buddhaghosa and Anuruddha, the seat of consciousness is definitely the heart. It should be understood that the Buddha neither accepted nor rejected the popular cardiac theory.

Dependent on Mind and Matter, the Six Sense-bases (saḷāyatana) Arise

During the embryonic period the six sense-bases (saḷāyatana) gradually evolve from these psycho-physical phenomena in which are latent infinite potentialities. The insignificant infinitesimally small speck now develops into a complex six-senses machine.

The six-senses-human machine now operates almost mechanically without any agent like a soul to act as the operator. All the six senses—eye, ear, nose, tongue, body and mind—have their respective objects and functions. The six sense-objects such as forms, sounds, odours, sapids, tangibles and mental objects collide with their respective sense-organs giving rise to six types of consciousness.

The conjunction of the sense-bases, sense-objects, and the resultant consciousness is contact (phassa) which is purely subjective and impersonal.

It should not be understood that mere collision is contact (na saṇgatimatto eva phasso).

Feeling or, as some prefer to say, sensation, is a mental state common to all types of consciousness. Chiefly there are three kinds of feeling: pleasurable (somanassa), unpleasurable (domanassa), and neutral (adukkhamasukha). With physical pain (dukkha) and physical happiness (sukha) there are altogether five kinds of feelings. The neutral feeling is also termed upekkhā which may be indifference or equanimity.

It should be understood here that nibbānic bliss is not associated with any kind of feeling. Nibbānic bliss is certainly the highest happiness (ānaṃparamaṃ sukhaṃ), but it is the happiness of relief from suffering. It is not the enjoyment of any pleasurable object.

Craving, beside ignorance, is the most important factor in the "dependent origination." Attachment, thirst, clinging are some renderings for this Pali term.

Bhavataṇhā and vibhavataṇhā are also interpreted asattachment to realms of form (rūpabhava) and formless realms (arūpabhava) respectively. Usually these two terms are rendered by craving for existence and non-existence.

There are six kinds of craving corresponding to the six sense objects such as form, sound and so on. They become twelve when they are treated as internal and external. They are reckoned as thirty-six when viewed as past, present and future. When multiplied by the foregoing three kinds of craving, they amount to one hundred and eight.

It is natural for a worldling to develop a craving for the pleasures of sense. To overcome sense-desires is extremely difficult.

Dependent on Craving is Grasping (upādāna)

Grasping is intense craving. Taṇhā is like groping in the dark to steal an object. Upādāna corresponds to the actual stealing of the object. Grasping is caused by both attachment and error. It gives rise to the false notions of "I" and "mine."

Grasping is fourfold—namely, sensuality, false views, adherence to rites and ceremonies, and the theory of a soul.

The last two are also regarded as false views.

The subtle difference between saṇkhārā and kammabhava is that the former pertains to the past and the latter to the present life. By both are meant kammic activities. It is only the kammabhava that conditions the future birth.

This refers to birth in a subsequent life. Birth, strictly speaking, is the arising of the psycho-physical phenomena (khandhānaṃ pātubhāvo).

Old age and death are the inevitable results of birth.

The Reverse Order of the Paṭicca Samuppāda

If, on account of a cause, an effect arises, then, if the cause ceases, the effect also must cease.

The reverse order of the paṭicca samuppāda will make the matter clear.

Old age and death are only possible in and with a psycho-physical organism, that is to say, a six-senses-machine. Such an organism must be born, therefore it presupposes birth. But birth is the inevitable result of past kamma or action, which is conditioned by grasping due to craving. Such craving appears when feeling arises. Feeling is the outcome of contact between senses and objects.

Therefore it presupposes organs of sense which cannot exist without mind and body. Mind originates with a rebirth-consciousness, conditioned by activities, due to ignorance of things as they truly are.

The whole formula may be summed up thus:

Dependent on mind and matter arise the six spheres of sense;

Dependent on the six spheres of sense arises contact;

Thus does the entire aggregate of suffering arise.

Thus does the cessation of this entire aggregate of suffering result.

The first two of these twelve factors pertain to the past, the middle eight to the present, and the last two to the future.

Of them, moral and immoral activities (saṇkhārā) and actions (bhava) are regarded as kamma.

Thus ignorance, activities, craving, grasping and kamma, the five causes of the past, condition the present five effects (phala)—namely, relinking-consciousness, mind and matter, spheres of sense, contact, and feeling.

In the same way craving, grasping, kamma, ignorance, and activities of the present condition the above five effects of the future.

This process of cause and effect continues ad infinitum. A beginning of this process cannot be determined as it is impossible to conceive of a time when this life-flux was not encompassed by ignorance. But when this ignorance is replaced by wisdom and the life-flux realises the āna dhatu, then only does the rebirth process terminate.

"'Tis Ignorance entails the dreary round
—now here, now there—of countless births and deaths."
"But, no hereafter waits for him who knows!" [7] 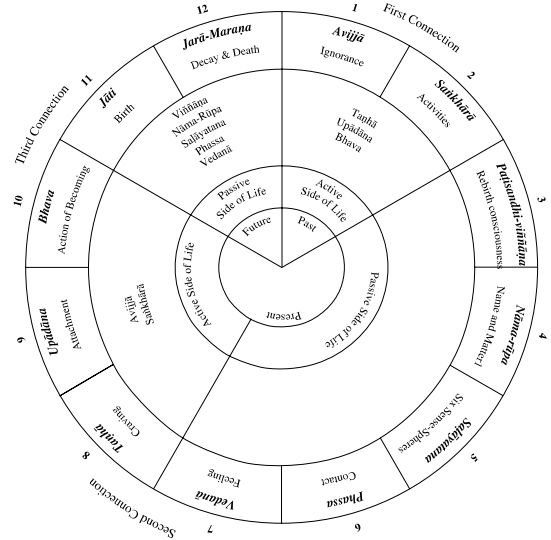 The Diagram 4. Wheel of Life 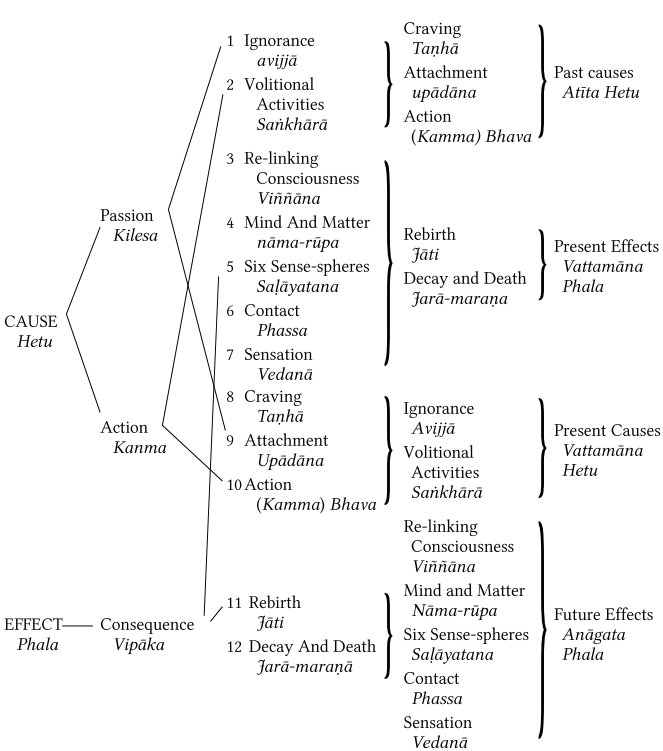 "Radiant is this consciousness," (pabhassaraṃ idaṃ cittaṃ) says the Buddha in the Aṅguttara Nikāya vol. 1, p. 10. According to the commentator the Buddha was thus referring to the rebirth-consciousness.

In the case of "rootless resultants" (ahetuka-vipāka).

In the case of "resultants with roots" (sahetuka-vipāka).